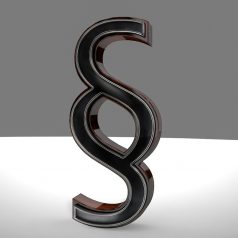 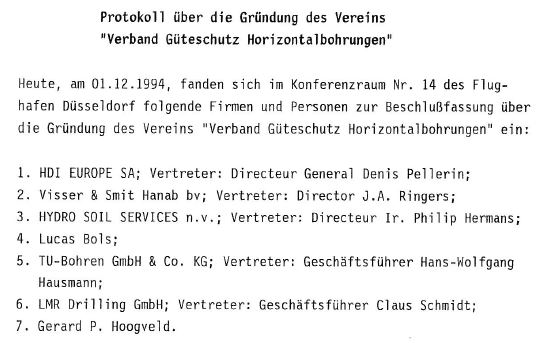 Object of the association is,

to keep the technical standards for horizontal directional drilling, to promote and to develop, especially by

A profitable business of the association is out of the question.

Regular members are juridical or natural persons, who execute professionally horizontal directional drillings with their own equipment. The application form of regular membership must include the sum of the pulling forces of all HDD-drilling rigs, two current reference letters of clients, a list of the projects of the last three years and a resilient information of the quality management system in use.

Associate members are legal or natural persons who are willing to promote the purpose of the association, but who do not carry out horizontal drilling themselves. An associate member who carries out horizontal drilling commercially after joining the association becomes a regular member. The application form of an associated membership must include the number of employees, a list of the projects of the last three years and a resilient information of the quality management system in use.

Persons who have been active in the HDD industry or whose membership appears suitable for the association’s purpose for other reasons (e.g. representatives from science, research or authorities) may be accepted as associate members (personal member). They have no active or passive right to vote.

Institutions or associations whose membership is suitable for the association’s purpose may also be accepted as associate members. They have no active and passive right to vote and may be exempted from the contribution in individual cases.

An honorary membership can be bestowed to natural persons, if they gained special merit with respect to the associations goals, or the science in the field of the technology of directional horizontal drillings. Honorary members are suggested by the board and are appointed by the general meeting. Their election requires a two-thirds majority. Honorary members are exempted from a membership fee as well as from the attendance fee at the annual congress. They have no active or passive right to vote.

The member’s meeting takes the final decision on the exclusion with a majority of 2/3 of the votes of the members present.

The member’s meeting has to decide on a new membership of the company excluded.

The members have to pay their contribution in money for each month membership. The amount of contribution, date of expire, as well as the payment of special contributions will be decided by the members’ meeting.

Specialities will be arranged by the contribution rules.

Organs of the association are:

(1) The entire board consists of the President and three Vice-Presidents:

the treasurer and three other board members.

Board in the meaning of the right of association and assembly (§ 26 BGB, Germany) are the President, the Vice-President (Representative for small scale drilling) and the treasurer. Each of them has the exclusive right to represent juridical the board.

(2) The members’ meeting chooses each member of the board for a period of two years, starting on the date of elections.

Simple majority of the valid votes will choose the other board members. Abstention leaving outside. If the election gives in two elections equity of the votes, the chairman decides by drawing a lot.

(5)The board divides the tasks among them. The treasurer is arranging the finances.

(6) All the decisions made by the board should be written down and signed by the chairman and keeper of the minutes. Place, date of the board meeting, names of the members present, decisions and results should be mentioned.

(7) The board works unpaid. The members have right on compensation for their actual expenses.

§ 7 Competences of the board

§ 8 The decision process of the board

(1) The board decides in general at board meetings, which will be convened in writing, by phone or by fax by the chairman or deputy-chairman, one week before the meeting. An agenda is not necessary.

(2) The board has the right to decide when at least five board members are present. At the decision process the majority of the valid votes is conclusive. With equity of votes the vote of the President is conclusive. The President chairs the board meeting, at his absence the Vice-President (representative for small scale drilling) chairs the meeting. If both persons are not present, a chairperson will be elected from the board members present.

(3) A board decision can also be made in writing.

(4) The combination of more board functions of one person is not permitted.

(1) In the members’ meeting regular and associate members has a vote. For the voting another member can be authorised in writing. This authorisation is for each member’s meeting issued separately. However, a member is not allowed to have authorisation for more than three votes. Associate members belonging to the status institutions and associations (see also §3 membership, paragraph 2), personal members and honorary members have no voting rights.

(2) The members’ meeting should be held once a year.

(3) Special members’ meetings can be arranged all the time. The board has to convene the meeting when at least 1/5 of the members this under statement of the subject to be discussed or decided is requested to the board in writing. The meeting is to be held at least one month after receipt of the proposal.

(4) The board convenes each members’ meeting. The written invitation follows with the agenda 3 weeks before the meeting. The invitations are sent by e-mail or by post. Place of the meeting to be decided by the Board.

(5) The board should put each proposal on the agenda, which are done in writing by at least half of the members till at the latest 2 weeks before for the meeting. The proposal should be with the members at least one week before the members´meeting. The board has the right to put in supplemented points for the agenda at the same time.

(6) The chairman decides the sequence of the agenda, the member’s meeting can decide on another sequence.

(9) Subjects not placed on the agenda, can be discussed and decided when at least 2/3 of the present members agrees.

(10) As long as the meeting is not deviant, all decisions are conclusive with majority of the valid votes. Abstention leaving outside. With equity of the votes, the vote of the chairman is conclusive.

§ 10 The Responsibilities of the members’ meeting

The competences of members’ meeting are:

(2) The termination of the association is only possible when this is decided at two separate meetings, with at least one month in between. The decision on the termination is only conclusive when at both meetings a majority of 2/3 of the members present agree to this decision.

As far as the members’ meeting do not decide differently, both President and Vice-President (representative of small scale drilling) are authorised to act as liquidators. The before mentioned articles apply as well in the case, when the association terminations for another reasons or loses its legality.

Representative language of the association is German. This especially applies to the articles of association, the writings on decisions of the board and protocols on the members’ meetings.

On disagreements between the members and the association a court of arbitration decides instead of the respectable court of law.

Little details will be arranged by the arbitration of the association.

This arbitration of the association is part of the articles of association and will be founded together with the request for registration at the register office.